On the 26th of January 2013, I was travelling virtually down the Kennedy Highway using Google Earth in search of Cawnpore Lookout when he chanced upon a very obvious crater like structure at the side of the road at Lat: 22°13’43.52″S Long: 142° 3’25.94″E 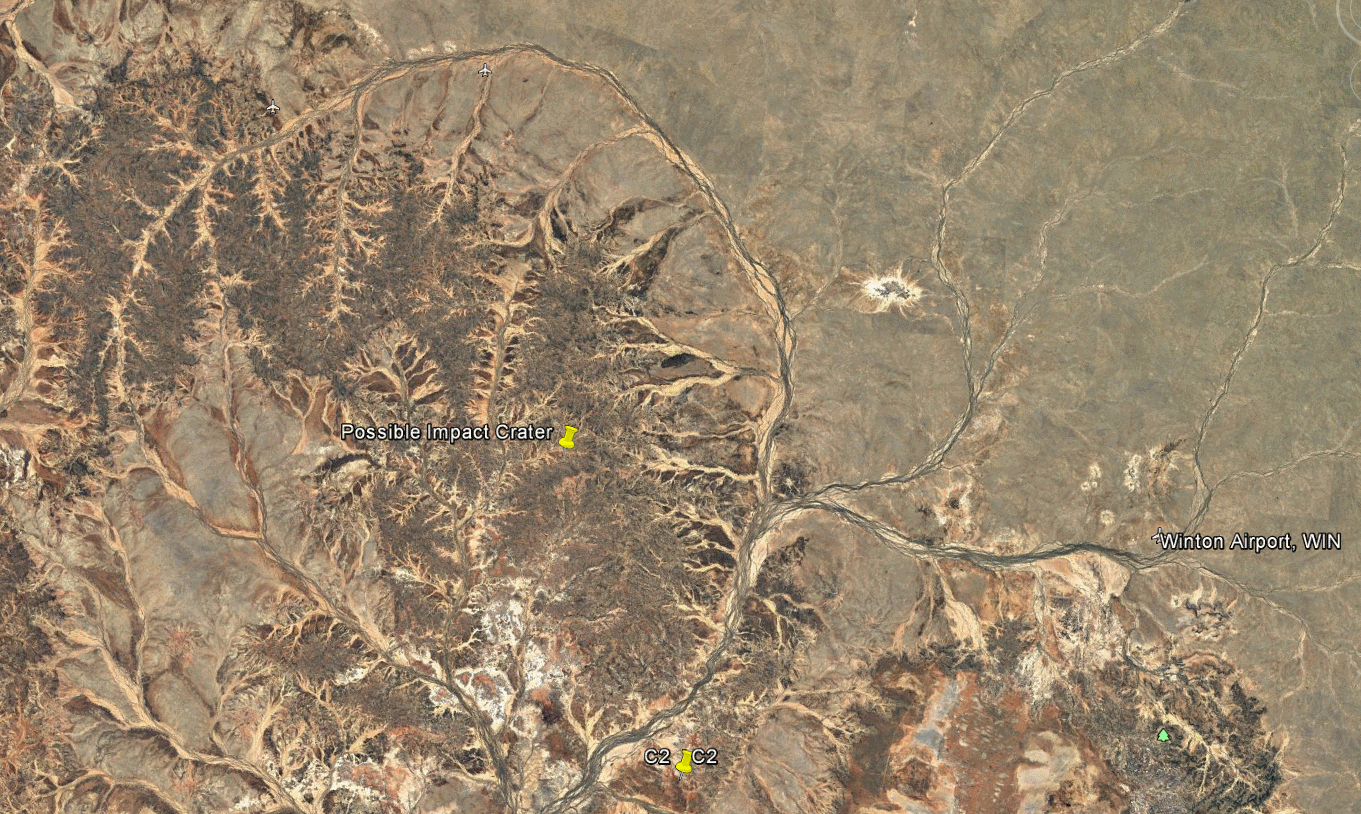 Having travelled this road personally in 2008 I believed the structure to be out of character with the neighbouring topology and made preliminary investigations to ascertain whether this may be a possible impact structure.

Of course, Impact structures are rare. VERY RARE. There are only 188 confirmed structures on Earth, so for this structure to be indeed meteorite crater number 189, I am going to have to find some strong evidence and discount any other likely explanation.

And The following explanations for the structure are considered as:
1. Erosion feature – The head of a valley or an ancient river bend.
2. Human made feature – a quarry!
3. Volcanic Caldera
4. Just one of those things – a chance product of weathering
5. Earth Impact structure
And the probability is considered most likely in that order.

Lets look at the crater, this evidence is called Megascopic – the really big stuff such as aerial views:

Putting some contours on images I have taken help highlight the feature. I have placed concentric rings on the overhead and side view photographs that follow the rock beds themselves and help to give an impression of what the crater may have looked like before it was so heavily eroded over time. The two lines radiating from the middle represent the extent of the crater as it exists today based on in-situ strata seen during the visit. 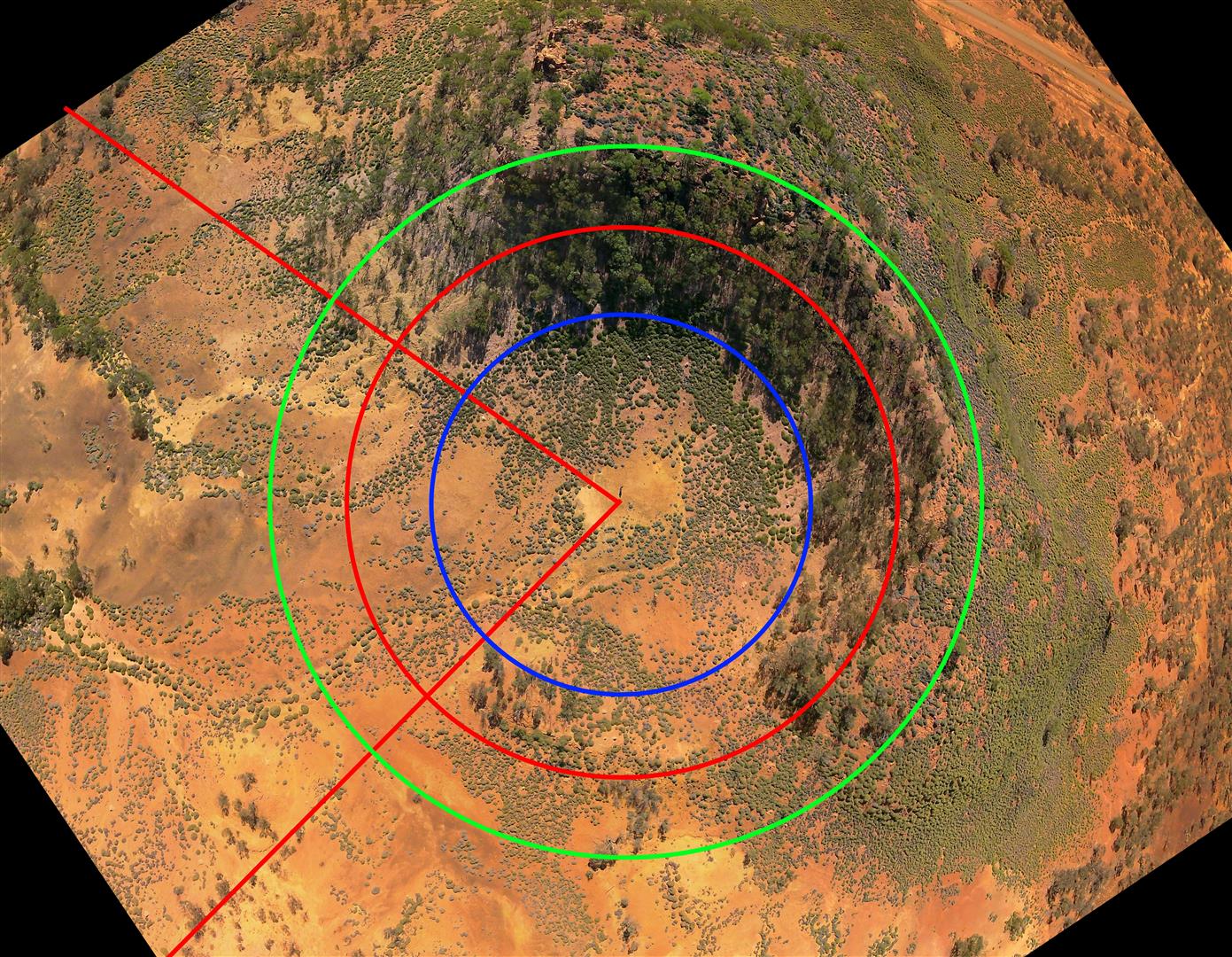 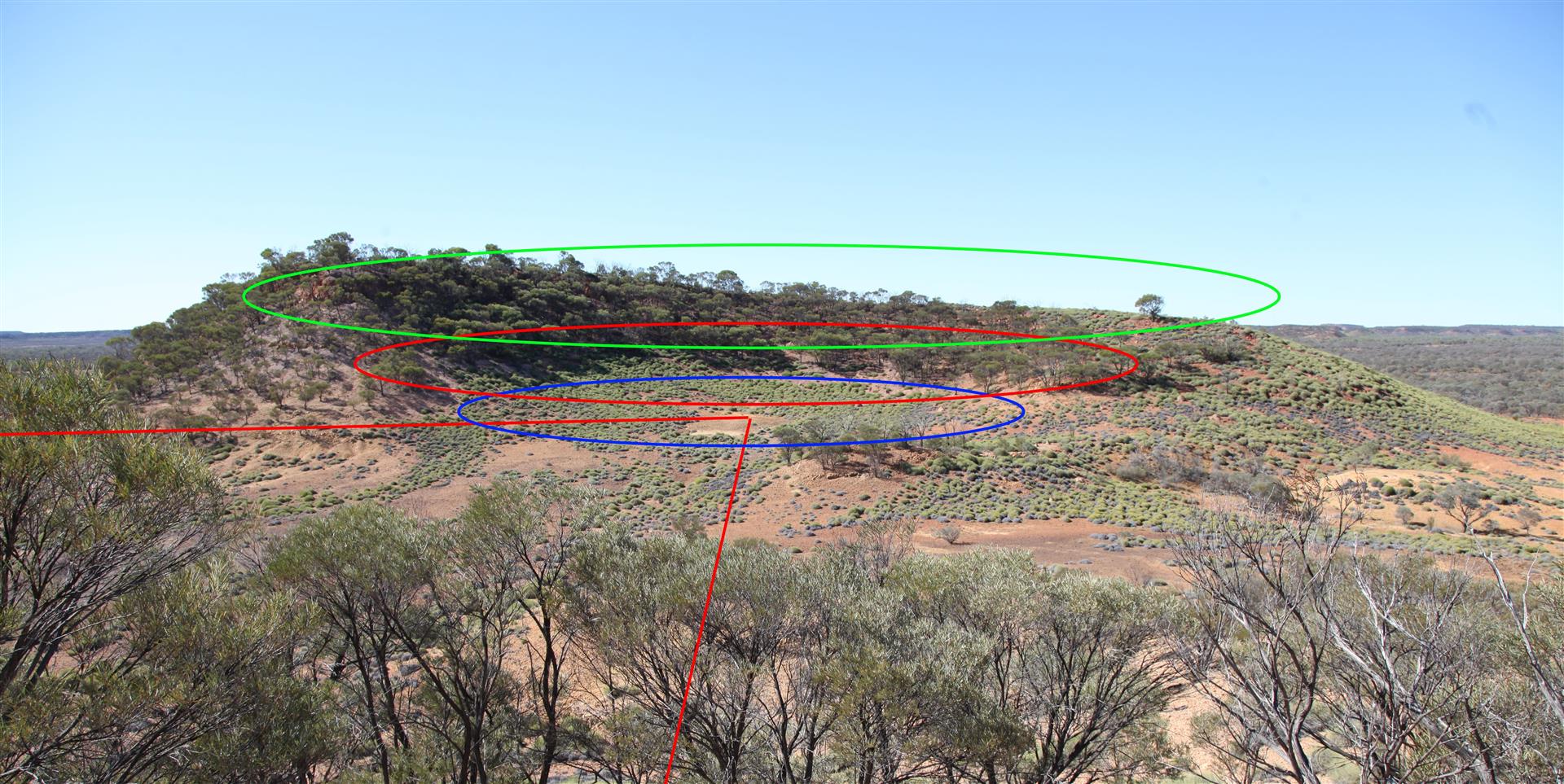 The structure is 150m in diameter perfectly circular with at least 270 degrees of wall intact. The whole structure rests on shattered bedrock which is some 10m higher than the surrounding countryside and the walls rise a further 20m to the ‘rim’. It noticeably does not resemble the traditional mesas in the area which I visited which appear craggy with a steep scree at the base. This structure certainly has plenty of scree, but with a pronounced curve and rock outcrops from base to summit.

Fancy a flight? Thanks to having too many toys, here is a Drones Eye view!

From the air we can see the fantastic colours of the outback: reds and yellows of iron stained sedimentary rock which is so typical. And right in the middle are yellow rocks and even without putting a foot on the ground we can tell that it isn’t an extinct volcano as the centre would be most probably be dark basalt (this was later confirmed as true).

Lets look at that list now:
1. Erosion feature – The head of a valley or an ancient river bend
2. Human made feature – a quarry!

4. Just one of those things – a chance product of weathering
5. Earth Impact structure

The next type of evidence is called Macroscopic and is the stuff that can be seen with the naked eye. This is the reason for our visit to Winton this year and two parties arrived to do the search. From Brisbane came me and the Mrs, from Home Hill came Rob Black, Director of NQ Astronomy with Pranvera Hyseni, Director of Astronomy Outreach of Kosovo who was here for an international solar outreach event sponsored by the Charlie Bates Solar Astronomy Program.

Rob and Pranvera were armed with Meteorite Sticks – these are telescopic ski poles with incredibly powerful rare earth magnets attached. The aim was to scour the whole crater and surrounds looking for meteorites – iron in particular. Not many impact structures have yielded actual meteorites and with this highly weathered feature I wasn’t holding out much hope, but off they went. 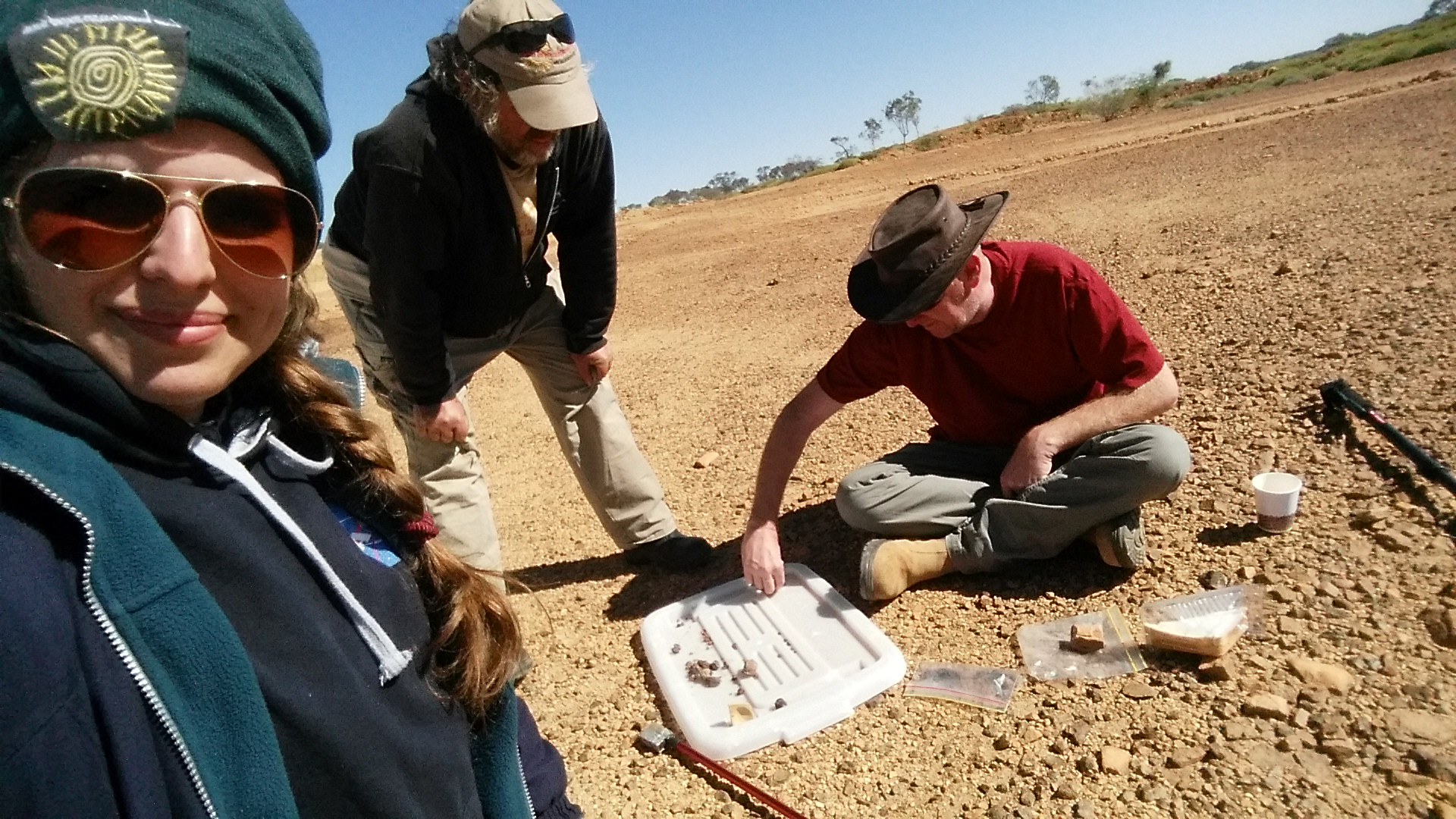 So after a full day of searching here we are, Pranvera, Rob and myself sorting out the meteor-“rights” from the meteor-“wrongs”. The meteorwrongs won a decisive victory and we came home empty handed. We also did some visual searching for the much more cosmically common Chondritic (rock) meteorites, but in the outback EVERY rock seems to have a dark fusion crust! Nothing.

I spent my time up on the feature itself trying to identify features indicative of an impact structure. Thanks to the advice and support Dr’s Glickson and Hickman, both professional Geologists and both meteorite crater discoverers in their own rights, I had some idea as to what to look for.

The structure is part of the Winton Formation. The geology of the area does not seem very well understood and has been surveyed largely for the quarrying of road base (that’s number two on the list!). The general consensus though is that the formation is made up of siltstones both fine and course which are in the region of 90 Million years old. They are topped by protective cap of lava or silcrete (very hard silica based stone). What is not clear are the ages of this layer which may be either of similar age to the underlying rock, or much younger.

The crater is indeed made up of siliceous siltstone and it is covered in exposed strata from summit to base. This strata is near horizontal, dipping at just a few degrees to the west. At/near the centre of the structure is intact sedimentary rock (the conclusive proof that the structure is not of volcanic origin). The top of the structure has a cap of silcrete and there were many vesicular lava fragments in the area. A further visit would be needed to confirm the exact nature.

The most striking aspect of the rocks around the crater wall was that they were all pulverised. every layer, every rock was shattered. Ironstones were broken apart, beds of strata were cracked and displaced but not by a large amount. I have surveyed many other local features to get a feel for the area and all rocks are fragmented and broken, but this are was truly exceptional and the following album demonstrates this:

(Hint: click on the first image to open the gallery and use your mouse wheel to scroll through it)

The intact outcrop on the NNE flank gave an interesting opportunity to see a cross section through the crater and it could be seen that the further one walked away from the face of the crater, the less broken up the rocks became. A good example of this is was with some ironstone concretions that were deeply shattered on the face of the feature but intact on the side wall.

This effect is seen throughout the feature and highlights the localised nature of the damage.